Research shows that if women have equal access to land, livestock, new technologies, financial services, education and extension advice, agricultural production across Africa would increase by 20  to 30%. This could decrease the number of hungry people globally by 12 to 17%. The same study has shown that if women also control this additional income, they spend more of it on food, health, clothing and education for their children than men would do. For those reasons, some of Trax’s programs are specifically focused on supporting women. One of these is the seed payback scheme. This scheme does not only offer women increased food security, but indirectly provides them with credit as well. One reason why it has been so successful for more than six years already is because it builds on principles of trust and accountability between groups of acquainted women that are already very strong. 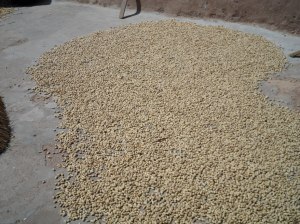 As part of the scheme, a farmer group is asked to select a number of particularly dedicated female members. These then receive 3 bowls of groundnut seed and 3 bowls of soybean seed each. They cultivate it and after their harvest they pay back 4 bowls of each. This will then be distributed among a larger group of beneficiaries. This cycle continues until all women in the group are served.

Ayamaa in her soybean field

Ayamaa Nsoah Abure is one of the beneficiaries of this year’s scheme. She narrates that she used to be able to purchase only one bowl of groundnuts. The yields she obtained from this would not be sufficient to preserve some seed for the next season. Some years the prices of groundnuts would be so high that she would not be able to grow any groundnut at all. Being selected as one of the recipients of a much larger quantity of seed, she has now harvested unprecedented amounts of groundnut. She said she will first pay back her four bowls to the next woman in line, save some groundnut for her family and sell the rest of it. With those proceeds, Ayamaa hopes to start a food-selling business. In the meantime, she prays that the soybean harvest will be equally good.