The Problem: Malnutrition in Ghana

The FAO’s (Food and Agricultural Organization of the United Nations) 2013 annual report The State of Food and Agriculture finds that Ghana has the highest rate of Vitamin A deficiency in West Africa. 75.8% of children in Ghana are deficient in Vitamin A and children (aged 14 and under) account for 38.3% of the total population.

Trax Ghana’s mission is to reduce poverty and increase food security in Northern Ghana and this includes improving nutrition.  Trax are working to reduce malnutrition through a new project piloted last year. We provided 50 farmers with vines of an improved orange-fleshed sweet potato variety which has been bred to have higher Vitamin A content than native varieties. The orange-fleshed sweet potato had been bred by the national station of the International Potato Centre (CIP).

The project was recently included as a case study (pdf) for the Alliance for Food Sovereignty in Africa (AFSA) where you can find more details on the project.

Farmers found that the orange-fleshed sweet potato matured quickly and they had a good yield despite low rainfall. In fact average yields per hectare were higher than the average sweet potato yield for the Upper East Region as reported by the Ministry of Food and Agriculture. This meant that farmers had a crop they could sell to provide an important source of income.

Last year farmers were given 300 vines each with the expectation that these would be multiplied and passed on to additional farmers in following seasons to upscale the project.  Beds of the improved sweet potato variety have been planted again this year with plans underway for much greater up-scaling next year. 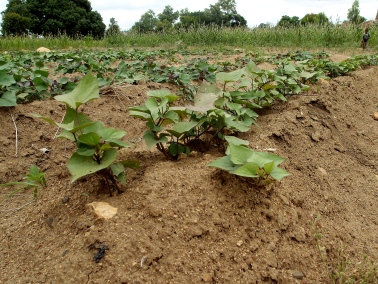